Our latest shower remodel is finally complete! Here is how it turned out!

When starting this project our client presented us with a bathroom space that needed a lot of love but, boy was there so much potential and hope in this bathroom renovation. The space was ideal for a luxury oasis waiting to be used and loved daily. Our client came to us eagerly wanting to upgrade their shower, bathroom floor, and toilet before her father came to town. She explained to us the dilemma of having a timeline that other remodeling companies couldn’t guarantee. Her current bathroom featured unlevel shower flooring, messy grouted tiled floors, and ultimately did not offer that clean and crisp bathroom that she dreamed of… in other words, it was a “hot mess” of a bathroom according to our client. This bathroom had so much potential however, the current layout was not functional and failed to maximize the outstanding potential this bathroom had. Our team at Valley Remodeling Az was excited to take on this project and guarantee a luxurious space for our client before her father came to town. Here is what the bathroom looked like before we began the remodeling process:

Starting a project like this requires a lot of trust, that is critical. Providing a professional and comforting relationship is a goal of ours to ensure a proper bathroom renovation for our clients. We were curious to know what our clients had to say about their trust in us while remodeling their bathroom. It was our goal to get the job done as they had envisioned. Here is what they said. “You guys were responsive. You were one of the top companies that actually, answered their phones. We had trouble getting ahold of companies to get our bathroom redone”. Our client’s answer goes to show how important responsible and professional communication is when trusting a company to properly remodel your bathroom. Without trust and professionalism this “messy”bathroom would have never been fixed before her father came to visit. It was trust, and us following through that made this bathroom renovation a complete success! We were so happy to provide the comfort our client needed. This was huge for us all, and the final reveal speaks for us all! 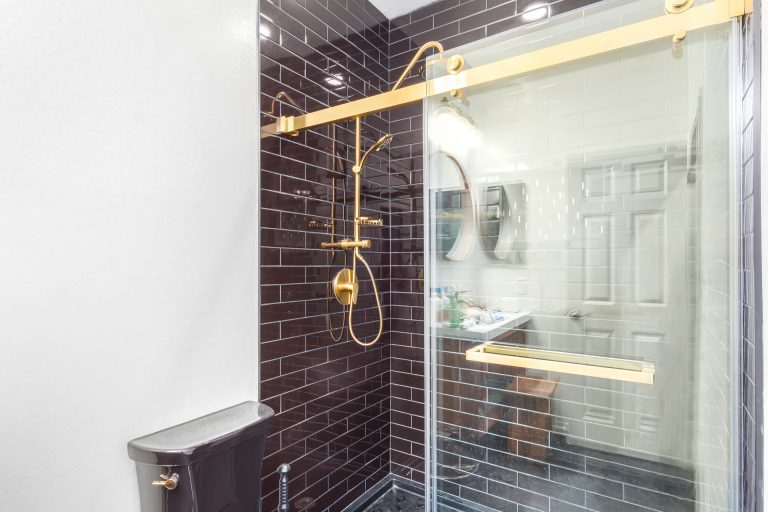 Isn’t that bathroom stunning! The look on our client’s face was priceless when entering their new oasis. “I have my bathroom back, and no longer have to use my guest bathroom!” she said. This is the type of reveal we dream of giving our client’s, and why we take so much pride in what we do. We were able to give them exactly what they wanted on a timeline that worked great for them. The hotel like bathroom shower was a focal point for this remodel, and our client was over the moon to get the luxurious shower of her dreams. We said goodbye to the unlevel shower flooring, poorly grouted tile, and unfunctional bathroom layout and hello to a masterpiece of intentional craftsmanship. “Having my bathroom remodeled has definitely made me a happier person, and I get so many compliments”, said our client. Now, this is what we live for!

As we mentioned before, previous to starting this project, our client came to us with many issues with her current bathroom. These were all things our team was highly knowledgeable on addressing and fixing. Her shower floors were unlevel, the grout between her bathroom floors were caked on and messy, and the toilet was not sealed properly. It is very common for us to enter a bathroom renovation like this and encounter multiple mistakes from previous updates, or wear and tear from years of daily use. It is our duty to properly assess these mishaps and fix the problem for good. Creating a sustainable and functional bathroom is one of our top priorities when remodeling a bathroom for our client’s. Here is a step-by-step list on how we went about

Would you please tell us your name and where you live?

Sara, I live in mesa Az

What problem were you trying to fix?

My shower and bathroom floor. I also wanted to upgrade my toilet.

Can you tell us why you wanted it fixed?

What made you call us initially?

Why did you trust us with your project?

Well, you guys were really responsive. It took a while for me to get a hold of a company to even get this redone. You guys were one of the top companies that actually answer your phones.

Overall, the experience was great. I like the way you guys have your website setup. The fact that I was able to give you a description and send you pictures through your website to show you what was going on and what I needed to get done. I felt that that was very Innovative compared to a lot of these other construction companies. A lot of them make it where  someone has to come out first. As for the workers that worked on my bathroom everybody was kind and respectful. And everything kind of happened very fast. I liked the fact that I was completely heard and not tried to be directed. For , example because I knew exactly what I wanted. Connie really delivered on getting me the materials that I wanted. She never tried to tell me that maybe I should go with something different. But at the same time she gave me options. I really appreciate when people listen and deliver on a request. I also like the fact that there were no hidden fees or unexpected charges. I literally only paid what I was quoted. Which makes me feel better because a lot of companies will come out give you one quote and then while they’re doing it somehow there’s something else that needs more money. So, that definitely made me feel good with choosing Valley remodeling. I was constantly in the loop of the project. I knew what was happening and when it would happen. I was well-informed. I never had to guess when someone was going to come over to do something or when a material arrived. Lastly, I really enjoyed the fact that they were able to assist me with in the same month of me calling to get this done. A lot of companies are 2 to 3 months out. And I just couldn’t wait until 3 months to get my bathroom done.

Did anything unexpected happen during the project?

The only unexpected thing that happened was suppliers like the shower door and the toilet lid. Things not being sent incorrectly. But that’s not Valley remodeling issue. So ask for with the company. No

How does us fixing your problem affect your day to day?

I have my bathroom back. I no longer have to go to the guest bathroom. Which also means I get my privacy back. The design alone makes me happy. My shower literally looks like a hotel shower. So, it always feels very luxurious. Having my bathroom bag has definitely made me a much happier person. I also get so many compliments.

What could have happened if you didn’t hire us?

Well, I know for a fact that if I didn’t hire you guys. This project wouldn’t have gotten done until two to three months from my request. And to be honest it being that far in advance I probably would have just never gotten it done. My house would have been very disheveled because now I’m using my guest bathroom instead of my personal restroom. Which in the end meant that I had no privacy